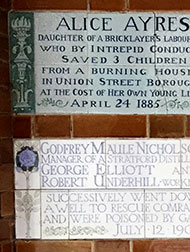 Postman’s Park, five minutes’ pleasant walk from The Rookery, is an inner-city haven with a history.

Opened in 1880 next to the then General Post Office, home to the world’s first postal service, it became the location of George Frederic Watts’s Memorial to Heroic Self-Sacrifice.

Watts, a famous English painter with a social conscience, was concerned that ordinary people who had carried out heroic deeds were seldom remembered. In a letter to The Times he cited the case of Alice Ayres, a servant girl who, trapped in a burning house, threw out a mattress to cushion her fall, but instead of jumping ran back inside to rescue three small children before, overcome by fumes, falling from the window to her death.

Some 50 memorial tablets were erected during the lifetime of Watts and his second wife Mary. A wonderfully relaxing place for a coffee, full of fascinating stories of everyday heroism.

The small-village feel of Clerkenwell adds charm to its array of delightful independent shops. Design specialist Magma, on Clerkenwell Road, has a diverse collection of magazines, DVDs, toys, pinhole cameras, and a series of limited-edition posters. Exmouth Market is a must for gift shops and independent restaurants.

Sightseeing is thirsty work, so we highly recommend stopping for a drink at The Jerusalem Tavern. There's been a pub by this name on the site since medieval times, though this higgledy-piggledy building is all 18th century cosiness.